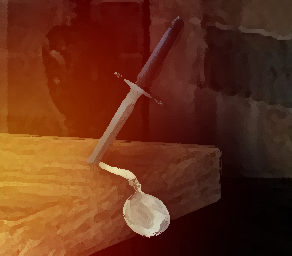 The time Jack was healing was mostly spent reading Charles’ books and getting caught up on the gossip: the shifting of relationships and businesses, the conception and birth of a variety of babies. What caught Jack’s attention, though, was the news of the summer festival.

“Is it that time already?” he asked Cathy. By now he was sitting up against the stone wall.

Cathy’s eyes glinted with mischief when she said, “Thinking about doing a little mingling?”

Jack shrugged. “I might be. Maybe it’s time I look for someone new to play with.”

Cathy flicked him on the edge of his wound, making him wince. “Or maybe you’re planning to go find your precious princess.” The last word hissed with venom. “Don’t start a conflict at a festival. It’s bad luck.”

“Are you going to stop me from going then?”

The mischief was back in her eyes. “I never said you can’t go. Just don’t cause trouble.” She stood and moved to one of the crates. “I’ll have your festival suit cleaned by then.”

Jack watched in confusion as she opened the crate and pulled out the garb he’d worn to every festival for the past five years. “Why do you have that?” he asked.

Cathy froze in the midst of smoothing out the cloth. She looked down and said, “You disappeared, Jack. Everyone thought that you were either dead or given a life sentence. I mean, you were given a life sentence, but no one thought you’d be sprung. Fred and I went and gathered what we could from your home before the riffraff could pillage it. Things to remember you by.”

Jack let his head rest against the cool stone. “I hadn’t even thought about my flat. I guess I thought I could just go home when I was healed. Who lives there now?”

Cathy shrugged, “Terrance moved in once most of your stuff was out.”

“Old man Terry? How does he pay the rent?”

“From what I hear he’s got an ‘arrangement’ with Madam Lilian.”

Jack shuddered at the image of those two wrinkled bodies in any form of arrangement. He changed the subject. “So what all did you salvage?”

Cathy patted the crate she had pulled the suit out of and the one beneath it. “Just a few things. Fred has your tools, Charles assimilated your books into his collection, so this is mainly clothing and little knick-knacks. You can dig through them when you feel up to standing on your own.”

“Put them on the floor. I’ll go through them now.” Jack pushed himself away from the wall and started crawling to the edge of his little box cavern.

Cathy wagged her finger at him. “You stay there young man.”

“And here I thought you’d be used to not moving,” Cathy responded nonchalantly. She pulled a small, ornate box out and brought it to him. “You can rifle through this, though.”

Jack took the box gingerly and opened it. Inside jewels and precious metals glinted in the flickering lantern light. He picked up a blue, translucent stone set in gold with a matching chain. He turned it over in his hand a couple times, running his thumb lightly over it.

“I figured you’d appreciate having that again,” Cathy said after settling onto the floor next to him.

Jack nodded and opened his hand so the pendant sat in the center of his palm. The translucent gem magnified the scar tissue underneath it. Jack frowned and gripped the pendant tightly. “I’ll be sure not to lose it again,” he said, then draped the necklace around his neck and reached back into the box. This time he pulled out a hefty knife with a ruby in the hilt and silver inlay on the blade. “I’ll be sure nothing is ever lost from me again.”